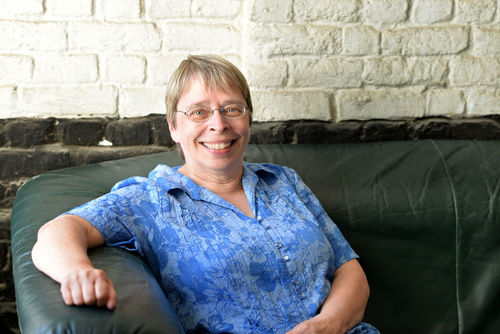 Sue was born and raised right here in Gordon Head in a non-Christian home. In high school, as an avid reader, she read The Cross and Switchblade by David Wilkerson and was moved by how Nicky Cruz called upon God for direction. She later had opportunity to hear Nicky Cruz here in Victoria. She and a friend went, heard the gospel and Sue responded in faith.

She began reading the Gideons New Testament she was given in Grade 5. Her life did not change much. She did not start attending church at that time. There was little follow up and she didn’t know other Christians. But over the next few years, some Christian family-friends entered Sue’s life, encouraged her faith and invited her to attend church. She began to attend at Victoria Gospel (Brethren), became involved with their Young Adults group and began to grow in her young faith.

At 25, Sue made a one-year commitment to serve with Operation Mobilization – which, in the surprise of God’s ways, turned into a lifetime calling. She spent 10 years living and working with OM in England, Austria and Hungary. In 1998 she moved back to Canada and took on a variety of roles within OM with a range of responsibilities – culminating ultimately in a role as the Chief Operating Officer of OM International.

Her first connection to Lambrick was through the liaison work with a woman from Lambrick who was preparing to work with OM. She met Don Crawford at that time and they maintained a connection [thank you Don!]. As well, some of her friends were attending Lambrick. Her immediate family remained in Victoria and as her parents aged, she returned to Victoria more frequently, worshipping with Lambrick whenever she was in town, and attending a Bible study at the Brouwers’ home. In time, Lambrick became Sue’s home church and the Missions Team decided to support Sue’s work.

Over the last few years, along with building relationships marked by intentional faith encouragement, Sue has joined Lambrick’s “Blessing Brigade” – befriending, praying for and delivering Sunday school materials to a kids’ ministry family; she is a regular part of PrayerWerks, interceding for God’s ministry in our community and congregation; she has recently begun participating with the Family Care Team, and is actively engaged in discipling a few younger women. Wherever she goes, Sue is known for her down-to-earth relatability, her sincere Christian faith and her heart to see others knowing and growing in Christ.

Sue was affirmed onto our Board of Elders by the Lambrick membership in November 2021.